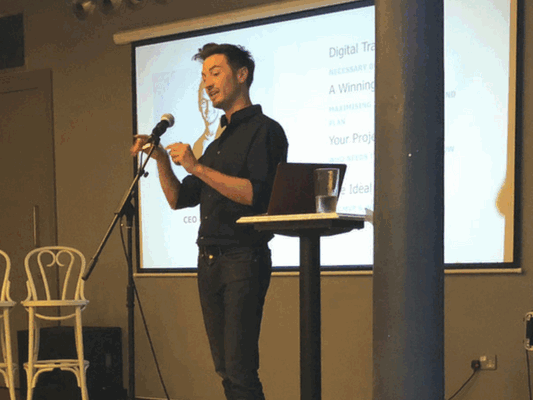 After the continued successes of our core Shopify Meetups in Manchester, we returned to LEAF again for a meetup focused on the needs of enterprise brands, and managing scale for a dedicated Shopify Plus Meetup!

After the continued successes of our core Shopify Meetups in Manchester, we returned to LEAF again for a meetup focused on the needs of enterprise brands, and managing scale for a dedicated Shopify Plus Meetup!

With speakers including Brightpearl, Patchworks, Andrew Banks and our Shopify Plus retailer Q&A panel, the event made for the perfect opportunity for existing Shopify Plus merchants and those looking at the high-growth platform to discuss everything Shopify.

From talk of integrating systems as you scale, to building the right internal culture, here’s everything that happened at Shopify Plus Meetup Manchester.

Dan from Statement kicked everything off with a quick roundup from Shopify Unite 2018, including all of the powerful new enterprise features that will be rolling out to Shopify Plus merchants over the coming months.

Dan walked through everything from Flow Connectors to multi-currency and local payment methods for Shopify Payments, and just how they’ll improve the lives of Shopify Plus merchants over the months to come.

First up from our lineup of speakers was Anthony from Shopify Plus Meetup main sponsor, Brightpearl.

Anthony talked about how integrating and automating store processes can help you to meet high customer expectations. Helping to speed up the fulfillment process and optimise every task after the customer clicks that all important buy button.

“The key to meeting your customer expectations about immediacy is having clean data in one place, and being able to automate as many of the repeat processes in your operation as possible.”

Integrations for Scale - Why People Are the Most Important Element of Your Integration Strategy: Luke Hodgson @ Patchworks

Next up was Luke from Shopify Plus Meetup drinks sponsors, Patchworks.

Luke talked about the importance of people and internal culture in an eCommerce team, and in particular, why having a great project manager is absolutely vital for integrating and maintaining your systems as you grow.

“Of the numerous people involved in a project of this kind there is one person who is more important than anyone. The retailer’s designated project manager.”

Growing and Selling a Shopify Plus Business: Andrew Banks @ ex-Matalan

The third and final of our individual speakers was Andrew Banks, ex Head of eCommerce for Matalan.

Andrew talked about his Shopify Plus story, building and selling a successful online business and why they chose Shopify Plus in the first place.

He identified just how vital being able to test, evaluate, learn and pivot quickly was the key to their success.

Not being afraid to fail and spotting the tactics, promotions and platforms that worked allowed Andrew to grow his online bathroom business rapidly, ultimately selling to Matalan.

To close out our first Shopify Plus Meetup, we brought Andrew back up to the stage, along with Shopify Plus retailers Lounge Underwear and Manière De Voir to take questions from the audience.

Both Lounge Underwear and Manière De Voir talked about the importance of influencer marketing to their fast growth, a common trait among many high growth eCommerce brands.

The panel also talked about how Shopify Plus’ Launchpad feature was transformative for the way they managed promotions, and again, our retailer panel touched on the test, evaluate, learn and pivot model that Andrew emphasised earlier.

Thanks for everyone who made it down to our first ever Shopify Plus Meetup Manchester, and thanks to sponsors Brightpearl and Patchworks for helping us host a great event.

If you’re already eager for more eCommerce and Shopify Plus insight, don’t forget to keep an eye on our events page for future Shopify Meetups and events.

Sign up to our newsletter for the latest ecommerce goings on and site launches.

By providing my email I agree for Statement to contact me via email with eCommerce advice, events and Shopify launches. Your data is stored securely and we never pass it on to third parties.